I visited Jay Petersen and his daughter Robin on a frosty December afternoon at his home in Bearsville. I became friends with Robin in third grade and clearly remember her mother Donna; tall and thin with short blonde hair and a warm smile. They lived in brick house with avocado kitchen appliances. Jay was a technician for Sears until retiring in 1999. As he recalls it, I love how distant his childhood in Bearsville seems from the town of Woodstock. Bearsville is a hamlet of The Town of Woodstock, just a couple of miles from town’s center.

Juliet:  What brought you to Woodstock?

Jay: My parents. I was 6 months old. They moved to Piney Woods Road. It was a summer house. They started coming up from the Bronx and renting a room at the Shultis Farm. “Brigadoon” they call it now. I’ve been up here since 1937.

During war time, my father was working for the Office of Price Administration. He was on Wall Street but during the war his firm went under, like most of them did. While he worked for the O.P.A., he’d come up on weekends. There were three of us. I had two brothers.

Juliet:  What is your first memory of Woodstock?

Jay:  Well, I didn’t get to Woodstock very much. I went to the Bearsville School. Miss Stone was my teacher until 1948 when my father’s boss came back from the war and started up a new firm. We moved to Forest Hills, Queens.

My first memory in Woodstock … The Seahorse probably. (We all laugh)

Robin:  It was a bar where the Elephant Emporium used to be. (Now it’s Rock City Vintage.)

Jay:  My father used to bring me to the Seahorse when I was nine or ten. They had a ping pong table in the wintertime. They also had a pinball machine. Donna’s father used to give her money to play the pinball machine and my father never gave me any money so I used to watch Donna play pinball. (more laughing)

I met her again in 1957 at the Irvington (now the Landau). It was owned by Bill Dixon and it was more bar than restaurant. There were so many bars. Nobody had time for food.

Juliet:  Was Donna a local?

Jay:  Oh yes, she was a Riseley, some of the founders of Woodstock. The Riseleys owned several farms throughout Woodstock and up Ohayo Mountain Road on both sides.

Donna came to the city with me for a period of about 2 years. We had gotten married at the Dutch Reformed Church October 12, 1958.

Robin: Didn’t you tell her you were going to marry her after your first date?

Jay: No, I told her I was going to marry her when we were at the Irvington, before the first date.

Juliet:  When did you make the choice to move here and get settled?

Jay:  I came out of the Navy and went to school in Manhattan. Donna worked at CBS.  We moved back in 1960, after we had Anthea, to this house. I drove a school bus for a while and worked at a meat packing house up here before working for Sears.

Juliet:  What’s changed about Woodstock over the years?

Jay:  Oh, Woodstock was the greatest right after the second world war.
A lot of people went to the Art Students League on the GI bill and came
up here in the summer time. This was a real wild town. Like I said, there were eight bars from 375 all the way up through Woodstock. People used to go from one bar to the other to see who was around. There was a place next to the Seahorse, two houses away. Four artists rented it and called it “Hopeless Towers.” It was next to Heckeroths, set back, a two-story cottage.

Juliet:  So what was going on there?

Jay: (Laughing) What wasn’t going on there? Well, the Seahorse had a long bar with a right angle turn that the bartender couldn’t see if he was at the center. These guys would lean over and grab a bottle of gin before they went home. Dick Stillwell, who was a real character, owned the bar and got wise that inventory was not right. He made an unexpected trip to the Hopeless Towers on a not too early Sunday morning. He rapped on the door and he walks in. There are about 20 empty bottles that they had taken and lined up all along a shelf. So he walks in and sees the Gilbey’s gin bottles and he takes one off and he knew by the serial number that they were his. “Hmm”, he says, “I see. I expect all the other ones are mine too. You gentlemen owe me…” (laughs) He had it all figured out. No arrests were made, everything was fine because the tabs that these guys had at the seahorse were astronomical. You know, three or four hundred dollars back then was like two thousand today! So, they got together and paid him.

The American Legion seems to be the only place I can find somebody who remembers the Seahorse around here. I mean, this bar was known from coast to coast, by everybody who was a writer or an artist. Back then, you really knew everybody in town.

Robin: Were there a lot of people who migrated from the city, even then?

Jay: They were from all over. The Art Students league in New York brought a lot of people up here. (The complex now houses The Woodstock School of Art.)

Juliet:  Any other highlights?

Jay:  I was an apprentice at the Maverick Theater. That was when Jose Quintero was the director and Lee Marvin got his start. I was in the play. They knew what they wanted, it was before Marvin’s first play which was called “Roadside”, and Teddy Ballantine, who was David Ballantine’s father, was an old silent picture actor. They needed a big gruff guy with a voice to play the part of the sheriff. They didn’t have anyone, they had all these small guys. So, Teddy says “Well, my son has this friend who is a plumber assistant and if we can just teach him to learn a few lines, the part isn’t that big. He could play the part.” Lee came down and then brought the script home. The next day he came to rehearsal and he was a natural right off the bat. This guy, he was something. That was his debut to acting. From there Lee went to Broadway.

Robin: The Library Fair, didn’t your dad win a car?

Jay: Oh yeah, the Library Fair. My mother won the car. She paid a dollar for the raffle. In 1953, she won an English Ford. A little American Made but British car.  A wonderful thing about the library fair is we had John Pike who whipped up a band with Bill Moor, a guy who played a wash tub.

I remember once I was at Kenny Reynolds’s gas station, which is now the pizza place. I used to stop there on my way home and talk to Kenny and the guys who worked there. One day it’s raining like crazy and here comes Joan Baez riding a Triumph motorcycle with Bob Dylan hanging on the back! Dylan used to have Kenny fix his car, so he was there a lot.

Robin:   What about the bakery? Wasn’t there a bakery in Bearsville?

Jay:  There was a bakery in Woodstock – Kirschbaum’s. He bought The Bearsville School and moved it there at the foot of the hill. Across from Oddfellows Hall.

I guess my first memory in Woodstock would be my mother bringing me to the Woodstock Guild and she enrolled me in a leather working course, making belts and learning the tools. The teacher was Stephenson. That was probably 1951.

Robin:  Probably going to Folk Art and getting the penny candy. And the parrot, Charlie. Or going to Laray’s while my mother got her hair done.

Jay: Did you ever see the five and dime store? Where the General Store was, and Houst, naturally. I bought my first pair of Levi’s there at Houst, which were outrageously priced at $3.50 for a pair of Levi’s! But I had to have them, so…

We had a scanner radio that Donna used to listen to religiously. There was a murder up here, right up the road. Sam Shirah was a guy in town who wore a triangular hat with a raccoon tail. He was visiting this lady who was married, but the husband was in New York working or something. The woman had a daughter at home while she went to Holly Cantine’s place which was a log cabin just up the road here. There was some kind of affair. The husband comes home and asks the daughter where her mother is. She tells him she was with Sam Shirah. He went down to Big Scot and bought a gun and went up there and shot Sam Shirah. They put Sam on the hood of the car because he realizes he screwed up and they’d already called the cops. He was still alive. But when they got to Cooper Lake Road, he hit the brakes and Sam went flying off so by this time, he was dead. Everyone is calling my wife to find out what was going on.

Jay: Well this time of year is rough. I was the only house down here when these kids went to school. My oldest daughter Anthea used to listen for the school closings. She was like 12 years old. When she knew the schools were closed, she would start my big tractor and plow the whole road so I could get to work. I missed Anthea when she left. Robin, forget about it.

Robin:  Yeah, I wouldn’t, but Sylvia (Gersbach, their neighbor back then) learned.

Jay:  Yes, I did teach Sylvia how to drive the tractor and plow the road. But it is beautiful here. It’s just gorgeous. I love mountains. This is my kind of place to live.

For further reading, get your hands on “Legendary Locals of Woodstock” to learn more about the characters Jay mentions, and for more great Woodstock stories. 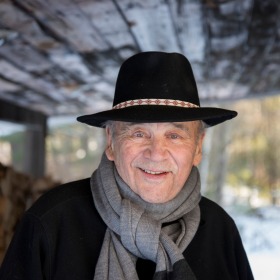 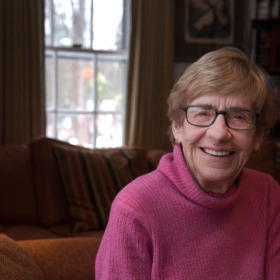 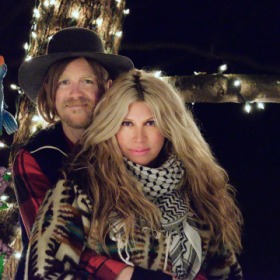 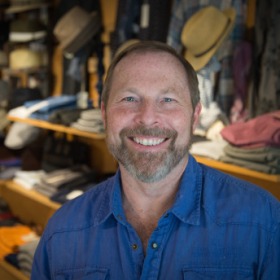 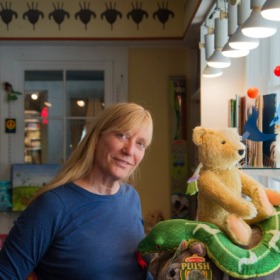